And the Wolf Shall Dwell 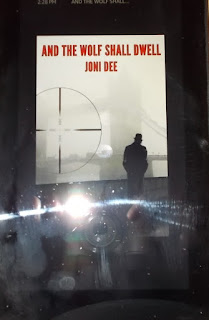 I would like to thank the author, Joni Dee, for a review copy of this book in return for an honest review.

And the Wolf Shall Dwell is the debut novel by Joni Dee. In this book, which takes place mainly in London, retired MI6 agent Adam Grey gets a phone call from an old informant wanting to meet with him and him alone. On the way to the meeting spot, Grey gets a phone call telling him that the informant had just committed suicide by jumping in front of a train. Since he was already near where the suicide happened , he was sent to the scene by MI6 to investigate. At the scene he comes across John Daniel, a foreign IT professional working in London who the informant ran into and muttered some words that John didn’t know what the informant meant by them. He then saw two men coming after the informant just before he jumped in front of the train. Grey and John then start working on trying to figure out what the informant meant and who was chasing him.

The author describes this book as a political and spy thriller. It definitely does have elements of both in it with plenty of action. About halfway into the book when they are starting to piece things together, a seemingly unrelated event takes place that drastically changes the course of the book. It has an interesting plot and story line.

If interested in reading this book, you can purchase it in various formats from the following site:

World of Sleuths Rating: ****
(Four out of five stars)